This week, Text Engine Productions starts publishing movie reviews of films that are on VOD and/or DVD. The focus will be on films that, in our opinion, have broken new ground but were nevertheless not big blockbusters, and so therefore we are bringing to your attention.

When you’re watching people walk down the street, noses in phones, or worse, driving while completely absorbed in texting, do you ever wonder why the allure of a digital world is so strong? The Congress, a combination live-action and animation feature directed by Ari Folman, gets at this question in ways both intriguing and heartbreaking. 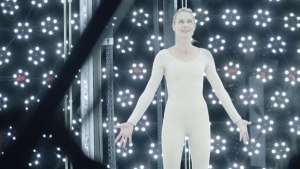 Folman directed the animated Waltz with Bashir and based this film on a story by science fiction writer Stanislaw Lem. Robin Wright, by turns radiant and raw, plays “Robin Wright,” the former star of The Princess Bride, who, from the vantage point of her mid-40s, evaluates her lack of success through decades of bad decisions; there is no House of Cards juggernaut in this alternate universe! The character has a son with a deteriorating illness that will leave him walled off from the world and her with years of medical debt if she doesn’t get a hit fast. Enter a big studio, offering to purchase the rights to map “Robin Wright” as a digital image that the studio can plop into any kind of entertainment medium wherever and whenever it desires. One condition is that Wright the actual human may never act again; as her digital image takes on roles, her biological counterpart is not allowed so much as a regional theater gig in Poughkeepsie. You figure with all that money, she can take up a hobby, right?

Wrong. The movie takes a left turn when Robin Wright…at least the original one…attends a “Futurist Congress,” the namesake of the film, some years later. This Congress occurs inside a strictly animated zone that is part Yellow Submarine and part Looney Tunes, kept that way through fenced security zones and advanced pharmaceuticals, the latter which is envisioned as a future tool of moviemaking. This animated world is one where people have largely escaped into their own versions of themselves, projected on the world and people around them through a science not yet discovered in 2015.

The Congress, though featuring some amazing cinematography, is not always an easy movie to watch. At times the animation appeared frivolous to me, seemingly an affectation representing the characters’ leisure and self-absorption. That is, until I realized that this cartoon world was how the characters were actually experiencing life: as a series of potent hallucinations, metaphors, and hyperbolized distractions standing in for the grittiness and complexity of biological existence. The world of this future is apparently too difficult to take without complete drugging.

Along the way, there’s civil unrest, a love story, a search, and amazing excerpts of a hallucinatory world taking flight around the main characters. Harvey Keitel, Paul Giamatti, and Jon Hamm play the men in Wright’s life, two non-animated and one animated. Most touching are the small moments of two people seeming to reach across dream boundaries to truly see each other, and that vulnerability is no easy feat to convey in cartoon format. Robin Wright, both in live-action and animated form, imbues her character with life and purpose in both inspiring and saddening ways. One scene where the character pulls away from the cartoon world and into the “real” one is particularly haunting, partly because it reflects how the physical world can seem like an intrusion on our modern digital tools and entertainments. The story’s relevance to our current fixations on gadgets and apps makes the story all too easy to accept as a possible future.

The movie also gets at what it means to be an actor, particularly a female actor, in current times. How many studios would love to freeze an actor at his or her prime and then digitally manipulate his or her image into whatever form form the studio would like? No contract negotiations. No actor pushing back on what the character would or would not do. No nudity clauses. No outrageous talent that is nevertheless argumentative and late. There is a horror and yet an inevitability to the equation put forward in The Congress. And because actors are our American royalty, the story implies that as actors are digitized, thrown into a pulsating mess of cartoonish situations, and ultimately duplicated and forgotten, so may the rest of us be. Unless we go another direction.

See the trailer on Vimeo.