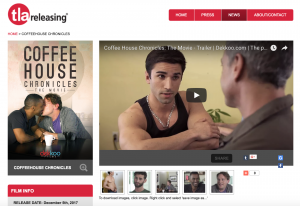 Coffee House Chronicles: The Movie is a 2017 comedy feature film about LGBT dating executive-produced by Text Engine Productions and written and directed by Stewart Wade. The film, based on the anthology web series, is available online through Dekkoo and on DVD through TLA Releasing.

“I was excited to finally work with my friend Drew Droege, whose work I’ve admired for years,” says Darryl Stephens. “But what I really appreciated about the project was the producers’ inclusivity with regard to casting. We need stories that reflect all of our experiences and Coffee House Chronicles makes a great first step.”

Go here to find the movie on VOD and DVD,  as well as see the trailer photos from the production.