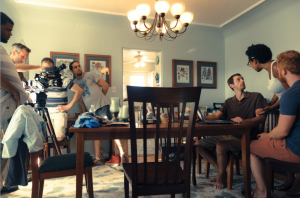 Here is an article written by Alan Reade of Text Engine Productions about turning  the Coffee House Chronicles web series into an independent film.

“I realized early on that it was going to be a combination of marathon and sprint. The marathon was the series itself, which in our case was episodic and thus featured new sets of characters each time. So we had to think, like all web series creators do, of the long game and what the series would look like when it was finished.”