“So what does a producer do?” The question was innocent enough. My friends and family have resigned themselves to never understanding the tech-business side of my life, because they never saw the results. But indie film and video? They’re something visible and tangible. I should be able to say my part in making them happen, right?

Okay, well, producing: The thing is, it’s got multiple facets. 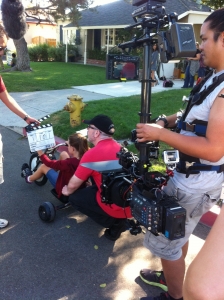 Sometimes producing is about getting actors to sign paperwork that they’d thought they’d already signed. Because a lot of it really does look the same after a while. And apologizing about needing just one more signature.

Sometimes producing is about insurance companies backing out last minute and working with a line manager, who restores your faith in humanity that day by finding another insurance company within an hour. The sticker shock will come later.

Sometimes producing is about working with spreadsheets that include numbers that you were sure added up the night before…because they really, really need to add up!

Sometimes producing is about convincing the manager of a shop where your film crew is set up that nothing will be damaged. Maybe even buying a few things as a show of good will. I would have had to buy that at Target anyway….

Sometimes producing is about talking to police when they walk through your production with crew, cast, and extras’ heads swiveling. And you are the one to shake the officers’ hands and walk over to a room or corner or parked car to show them that, yes, your permits are up to date.

And still at other times, producing is about pushing an eight-year-old actress on a faux Big Wheel purchased by the propmaster from a thrift store. With plastic wheels that look like they’ve been up and down the entire length of Lankershim Boulevard. Over and over again more than 18 times. With a Steadicam operator following right behind you.

Overall, I think producing is about laying a foundation for a film or video crew, making sure the structure is in place, and then getting out of their way because you trust that you’ve brought in capable and resourceful people.

All while not tripping over the faux Big Wheel of course.